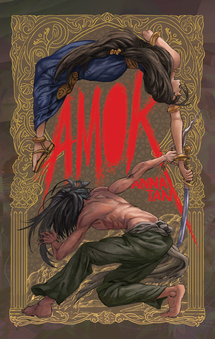 What is faith, except hope in desperation?

All Putera Mikal wants is to gain the Amok Strength, the supernatural power granted by Kudus to the Mahan royal family. No matter how religiously Mikal keeps his vows, Kudus still denies him the Strength—whilst his father, Sultan Simson, flaunts the Strength despite his blatant defiance of the Temple and the priests’ visions of coming doom.

Then the prophecies come true.
​
​Taken captive, Mikal must find a way to liberate his people and restore his throne Maha—and the key to this is the Amok Strength. But what does it take to gain Kudus’ favour?
Ebooks are dropping early!!
Honestly, we were really only waiting for the paperbacks to be printed to launch Amok. Now that this new lockdown is messing up the timeline, we figured we'd drop the ebooks early. We'll still keep our preorder prices, though - so you'll be able to grab Amok from your favourite ebook retailer at RM12 / USD2.99 until the 23rd of June...and read it right away! (Well, maybe not so right away - most of the books will go live between 1 & 2 June).
We're still open for paperback preorders, but we don't have an expected ship date as yet. So we'll keep the preorder price of RM35 until we actually receive the printed copies. If you preorder a paperback now, we'll also send you an ebook copy so that you can read it first while waiting.

While we're at it, send a screenshot of your Amok purchase receipt (whether ebook or paperback) to admin@teaspoonpublishing.com.my by 24 June to claim a free copy of The Painted Hall Collection! Also tell us if you’d like it in ebook (e-pub or mobi) or if you’d like a paperback (Malaysia only)—we’ll ship this to you for free.
If cursed is the hand that kills, then it wouldn't matter if that same hand stole, would it?

Tulen feels doubly cursed. As punishment for her crimes, she’s forced to serve the bratty princess of Impian...until said princess embarks on a pilgrimage. Tulen grabs her only chance to offer a sacrifice at the holy city of Suci—and maybe, finally, feel clean again.

Sultan Mikal has set his face towards Suci—and certain death. Nothing about his Penance is clear except the fact that if he fails to complete the Covenant of Salt, Terang will fall along with him.

When misfortune strikes and the completion of the Covenant is put at risk, Sultan Mikal is left with no choice but to seek Tulen’s help. Now Tulen faces a difficult dilemma: What is her absolution worth in the face of the sultanate’s very existence?
Yosua wears an uneasy crown. Although he is now Raja of Bayangan, he still longs for the land of his birth where everything was much simpler…and less deadly.

But peace doesn’t come easily, not for nineteen-year-old servant playacting at being king.
​
With his parents brutally murdered and his uncle bent on revenge, Yosua must decide where his loyalties truly lie. With his only remaining relative and the kingdom he has claimed? Or with his best friend Mikal and sultanate that raised him as a hostage?